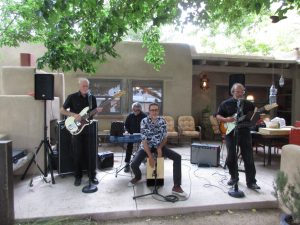 “Luz de Presente” is one of several original pieces of music that I composed for the April 2015 Vortex Theater production of “Bless Me, Última” at the National Hispanic Cultural Center.

I previously collaborated on the live music that accompanied the staging of “The Farolitos of Christmas” performed in December 2012, also a joint collaboration between the Vortex and the NHCC.

I sang and played guitar for the premiere production of “Última” at the old Vortex Theater and for the statewide touring productions in 2009 and 2010.

I played the roles of Philostrate and Peas Blossom and performed live music for the June and July 2014 staging of “A Midsummer Night’s Dream,” another collaboration between the Vortex Theater and the City of Albuquerque.

I was the pre-show coordinator for the “Shakespeare on the Plaza” plays in Summer 2015, where the quartet in which I sang and played guitar, the West Ella Band (now called Vintage Grand Prix), opened several shows in the downtown, under-the-stars location.

Vintage Grand Prix can be heard playing soul, country, rock and folk music for diners at Las Ristras Restaurant on “Taco Tuesday” from time to time, appearing from 6 to 8:30 p.m. Las Ristras is located at 4940 Corrales Road, #400.

Listen to some samples from my archive: